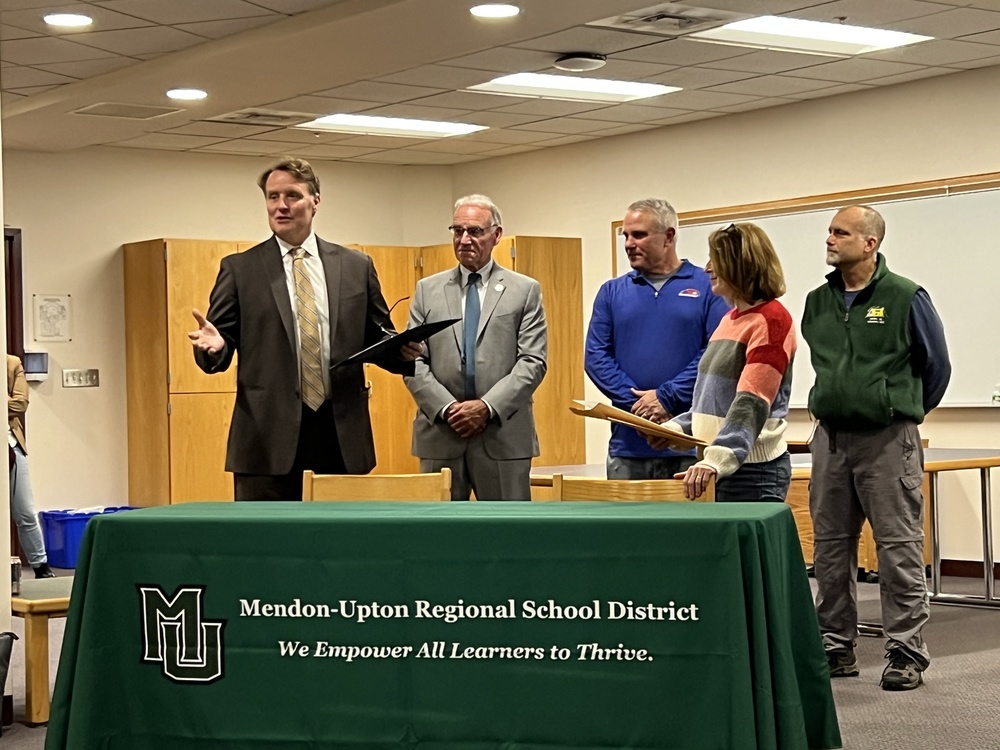 MENDON – The Mendon-Upton Regional School District and its School Committee have recognized We Care Miscoe, a volunteer group that has contributed significantly to increasing the aesthetics and pride at Miscoe Hill Middle School.

The Middle School, the original Nipmuc Regional High School, opened in 1960. Volunteers in 2019 formed a non-profit, now named We Care Miscoe, to improve the school without seeking taxpayer support.

We Care Miscoe has completed several projects, including improving the staff and faculty lounges and repainting signage. This summer, students, families, and community volunteers painted more than 40 doors and gave the main lobby a facelift.

Lead organizer Diane Duncan was honored for her efforts at the Oct. 17 School Committee meeting.

“It's never about Diane. She is so much about service and other people, and the “we” of We Care Miscoe,” Superintendent Maureen Cohen said. “So many people in the community came together because they want to honor her leadership, for pushing these projects forward.”

“We Care Miscoe is nothing without the ‘we,’” Duncan said. “I can have all the ambition to make change and want things to be better, but the only way to make things better is when people help, support, and volunteer, and make a better place for students and staff.”

Duncan credited the group’s many volunteers. “I’ve walked away with greater pride in our Mendon and Upton community,” she said. “When we needed people to step up, they did.”

Principal Jennifer Mannion sees the difference these changes have made in the school culture.

“We want to provide a warm and welcoming educational environment, and that includes the building itself,” Principal Mannion said. “We Care Miscoe volunteers have spent hundreds of hours so that our students, faculty, and staff can learn and work in bright and updated surroundings.”

The District, School Committee, and Superintendent Cohen wish to thank the Upton Men’s Club, which helped to fund the lobby project. They also wish to recognize the many volunteers who donated their time and energy to improving Miscoe Hill Middle School, and thank the following businesses who contributed:  Pelc’s Painting, Koopman Lumber and Hardware, Chris Moran Designs, and ACE Hardware.